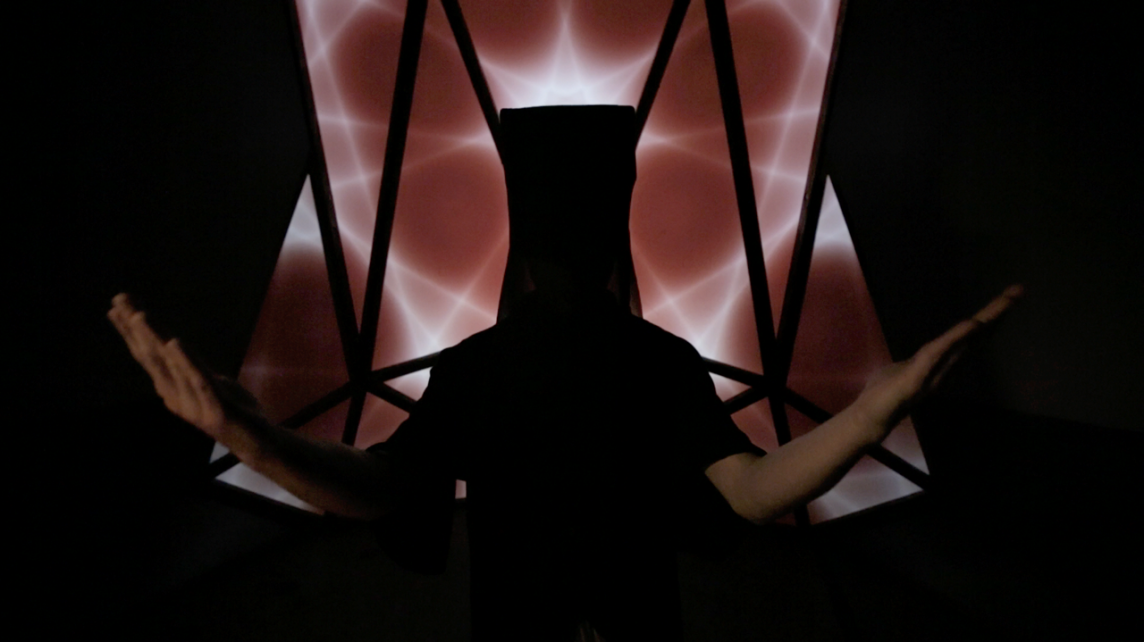 This video release is the short form synopsis of an elaborate ritual that is constituted of ten Chapters which include Baptism, Robe, Vision, Mudra, Circle, Invocation, Dagger, Death, Chalice, and Network. Each ritual forms an hour long narrative that parallels information design to ceremonial magic. Much like a computer program, when a ritual is executed it produces an expected outcome that is derived from the elements of the procedure. Rites makes use of tools and concepts that are used in both software design and ceremonial magic: objects and their relations, metadata / sigils, encryption / ciphers, chaotic systems, networking / animism, function calls / invocation, logocentric causality, and gestural language. Rites was conceived and fashioned with the intent of utilizing the ritual as a means of (re)programming the human organism.

“Ritual is the primary method of programming the human organism.”

The derivations of formalized magic can be traced back to the literate scribes of Egypt, priests of Assyria, and the brahmins of India. To cast a spell is quite literally to spell. The grimoire, or book of spells, literally comes from the French word grammaire. To ‘say the magic word’ is a colloquialism for good reason. It is because language is the mode and medium by which the magus transmits their Will. Thus it is not much of a stretch to assume that these concepts translate nicely into a logical computer syntax. But spells and incantation are only a fraction of the magical ritual. Invariably the magus must construct a Temple in which to execute the rite. The Temple functions as the operating system on which the codes of the magus are executed.

In Vatica Dahlia’s Rites the illuminated sculpture serves as the magi’s Temple. Modelled using parametric architecture software, the sculpture uses generative algorithms to employ geometries that provide a framework for projections. The Altar, another essential relic for conducting a ceremony, was also generatively modelled and fabricated to reflect the geometeries in the sculpture. Atop the Altar lie the tools of the magus.

By adopting these practices, Rites’ hyper-compressed mythology makes use of these tools in combination with the Will of the magus. The tools are utilized as a literal and figurative extension of his Will. Simply put, the magus and the wand are already connected through the pre-existing systems of symbols and language. The Will of the magus is furnished by Nature with an apparatus adequately equipped to convey and execute its orders.

By utilizing computer networks Vatica Dahlia threads together the various components of the ritual into an interconnected animist matrix. The web of objects, light, and audio are delicately prepared to be subjugated by the forces invoked and enacted by the magus. This correlation between networking technology and animist ideology is exercised to express the relational qualities of the tools, their environment, and their operator.

Predicated on Arnold Van Gennep’s research of rituals, Rites utilizes his tripartite structure of ‘separation, transition and reincorporation’ as a programmatic framework. By navigating this structure of initiation, each Chapter unfolds in a dynamic, combinatorial interplay of the magus, the objects, the environment, the incantations, the gestures, sound, and light to elucidate Van Gennep’s concepts. Rites uses Alfred North Whitehead’s “Eternal Objects” as a means for establishing a common language of symbols used to carry out the Work. Rites employment of objects also alludes to the burgeoning philosophical schema of Object-Oriented Ontology which states that “objects do not function either as constructs of construction of human/societal behavior (social relativism) or as the aggregation of smaller bits (scientific naturalism).” Rites aims to exhibit that tools of the magus are not inert but have a prescribed function latent within them.